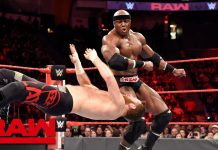 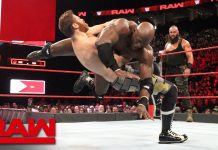 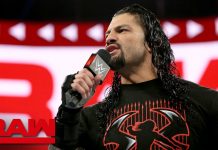 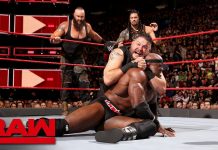 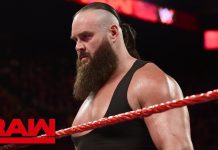 Braun Strowman demands an invitation to the Men’s Money in the Bank Ladder Match: Raw, May 7, 2018

Every single wrestler in #WWE plays a character, even if that character is really close to who they are in real life. They all do a remarkable job of staying in character – except when they don’t.

Below are twelve of the times that WWE wrestlers broke character while the cameras were still rolling.

[…] After Lesnar was hit with a stiff shot, he popped back up, broke character, and slammed Strowman in the face while telling him to slow down. That seemed to get through to the younger wrestler, and by all accounts, the two men patched things up pretty amicably afterward.[…]

WWE Kofi Kingston started his career as a Jamaican wrestler. That’s a little odd, considering Kingston was born in Ghana and raised in the US, right? […]

[…]When Jericho and Neville (now both of AEW) had a match, Neville went for a fairly standard maneuver and ended up with an injury that would derail his career. Jericho, the veteran that he is, noticed the injury and tried to go for a quick pin.

Unfortunately, things weren’t communicated clearly to Charles Robinson and Robinson didn’t count the three count. Jericho jumped up, shoved Robinson, and forced him to end the match in a DQ – something that went against the script and got both men a bit of heat. […]

[…] When Roman Reigns announced he had cancer, he didn’t do it as The Big Dog. Instead, he came to the ring very much as Joe Anoi’a, telling the audience that he really did have leukemia. It was an incredibly emotional moment for all involved, especially since no one knew if he’d ever be coming back to the rings. […]

Randy Orton is a walking, talking character break. It’s not that he’s a bad wrestler or that he doesn’t try, but it’s very clear that the man just doesn’t care sometimes.

Whether it’s admitting that he forgot a line in a promo or the fact that he’ll stop selling as soon as he notices the cameras are off of him, Randy breaks character whenever he feels like it. […]

The crowning achievement of Orton’s inability to care about things onscreen, though, has actually been worked into a storyline. Yes, it’s the time when he laid into Kofi Kingston for being ‘stupid’. […]

2015’s NXT Takeover: Brooklyn was the culmination of a long and epic feud between Sasha Banks and Bayley. The two definitely put one another through hell, and they gave the fans some awesome matches in the process. When the match was over, though, the fans were in for a surprise.

Charlotte Flair and Becky Lynch joined the two NXT wrestlers in the ring for their own version of the infamous Curtain Call. The four women celebrated Bayley’s win together, even though the four have all feuded at various times during their NXT and main roster careers. Though it was a break in character, this moment definitely felt well-earned.

[…] You’ll see this one from time to time – Randy Orton went over to talk to Shane McMahon’s kids after Survivor Series, and HHH made sure to check on a child that he’d scared a bit earlier. This isn’t major stuff these days – older fans know that they’re playing a role, after all. […]

If you’re a relatively new fan of WWE, you probably know Michael Cole as the straight man play by play announcer on Raw. What you might not know, is that Cole went through a brief (and obnoxious) period of being a heel commentator – complete with a feud and WrestleMania match against Jerry Lawler.

This character was brought to an end in September of 2012 when Lawler had a heart attack on-air during Raw. […]

1999’s Over the Edge PPV is one of the most notorious in WWE history. Regardless of anything else that happened in the show, it will always be known as for one thing: it’s the night that Owen Hart […]

JR’s call was a spur of the moment and horrifying, but this particular brake in Kayfaybe was both planned and beautiful. […]

This is the big one for most wrestling fans. When Shawn Michaels put Bret Hart in the Sharpshooter and the bell rang, someone broke kayfaybe. Whether it was Michaels, Hart, Hebner, or McMahon is hard to say – and it very much depends on whose version of the story your really believe[…]