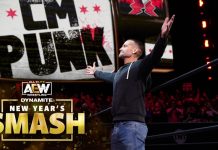 AIW Absolute Archives: Colt Cabana. Derrick Bateman. We don’t need to say much more about this one, but we will. This contest, from AIW’s NIGHT OF MYSTERY, was the winner of a fan poll involving some of the biggest match-ups from the early days of Absolute Intense Wrestling. Night of Mystery was AIW’s sixth show, and, back then, Derrick Bateman—”Deviant” Michael Hutter, as he was known then—was, as the leader of the Sweet Dude Club, was one of our earliest breakout stars. Night of Mystery brought about his biggest challenge to date in the form of one “Classic” Colt Cabana, Professional Wrestler, who was making his AIW debut. Back in 2005, Cabana was fresh from tours of Europe, where he picked up on the British mat wrestling style exemplified by Johnny Saint. This contest comes at an important time in the evolution of the Colt we know and love today, and was the beginning of a very long, very fruitful run in AIW.

We’re very proud to bring you this free match from the AIW archives. More from Colt Cabana, Derrick Bateman, and the rest of Absolute Intense Wrestling’s world class roster await you on our YouTube channel, which you can subscribe to, and at our store, http://www.shop.aiwrestling.com