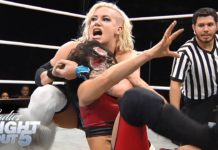 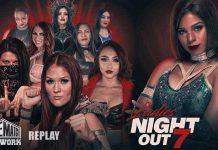 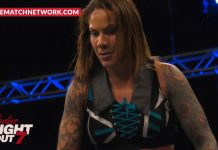 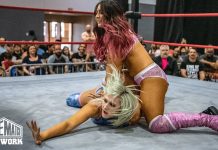 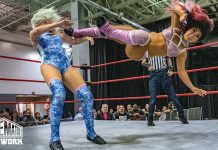 Alex Gracia vs Heather Monroe – Queens of the Ring

The only way to watch Ladies Night Out: Underground is here on the Title Match YT channel or on our premium streaming service, http://TitleMatchNetwork.com.

This is the debut episode of Ladies Night Out: Underground.
Get ready for a grittier, more in-depth look at the women behind the LNO brand.

This show is invite-only & closed off to the general public. If the women make it here, they are elevated to the Ladies Night Out main stage. None of the opponents know who they are wrestling ahead of time. There are no preparations.

Our main event from episode 1 features Thunder Rosa vs Alex Gracia. Thunder Rosa is a 5 year veteran who was also known as Kobra Moon on Lucha Underground. Alex Gracia has been wrestling 2 years but has already performed on Ladies Night Out & performed in Japan for Stardom. This is very much a teacher vs student match. Does Alex have what it takes to defeat her former teacher, Thunder Rosa?

Also on the show – the debut of Serrano (aka Lacey Ryan) as she battles Jenna Lynn. Serrano is a 7 year pro who who worked throughout California, Utah & Texas. Jenna Lynn is 2 years in the business but has already been featured on 5 live LNO events. Jenna was trained by Booker T in Texas City & looks to knock off the new comer to LNO, Serrano.

And the open things up, we feature Hyan vs Raychell Rose. Hyan is 5-0 at Ladies Night Out competition. She arrived back in Houston after competing in Japan (Stardom) for a recent tour. Literally, Hyan walked off the plane & into the arena where Ladies Night Out: Underground was set to begin.

Raychell Rose is now 2-0 at Ladies Night Out. Her most recent win was a breakout performance at LNO6 against current AEW star Kylie Rae. Rose has also collected a couple new titles in promotions across Texas & is not ready to give up the spotlight.

Watch LNO Underground Ep 1 in it’s entirety only at http://TitleMatchNetwork.com

Matches were shot live at Booker T World Gym Arena in Texas City, outside of Houston.

Watch the 1st 6 Ladies Night Out events only on ➤ http://TitleMatchNetwork.com

Check out the ROW Live! ➤ http://RealityofWrestling.com