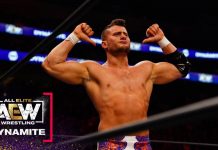 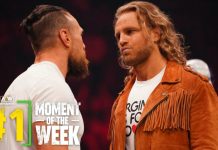 As happy as crowds generally are to see Rollins, he’s made fans angry more than a time or two. In fact, he gets in hot water with the Universe so often in real life that someone should make a list!

If you really want to see an angry fan, just show him or her one of the newest pieces of Seth Rollins’ merch.

Seth Rollins and Becky Lynch were rumored to be in a relationship for quite some time, but the haters came out of the woodwork when the two made the official announcement that they were together. Things got even worse once they started appearing on screen together[…]

8. Talking About Other Promotions

Seth Rollins has been called a locker room leader in WWE, and he takes that position very seriously. He takes it so seriously, in fact, that he’s become something of a one-man PR team for the WWE. Instead of just talking WWE up, though, he seems dedicated to picking on smaller promotions[…]

Seth Rollins hasn’t had a great track record with dealing with Legends – especially those who are more beloved than he is!

6. Returning as a Heel

This one’s on the bookers, but it’s definitely one of the things about which fans got the angriest and that has had the longest-lasting impact on his career[…]

5. Staying as a Face

Some fans just won’t be happy with anything that Rollins does!

The problem isn’t that people don’t want to cheer for Rollins, but rather that he’s not doing anything worth cheering. He’s fighting against Lesnar, who gets universal boos at this point – but Rollins isn’t getting an equivalent response[…]

This is kind of a deep dive for those who aren’t familiar with wrestlers outside of WWE, but it’s definitely one of the most pressing issues with Rollins lately.

For those who aren’t familiar with Will Ospreay, he’s widely considered one of the best wrestlers in the world. When Rollins claimed that he was the best of the best, Ospreay naturally replied that he was on Rollins’ level[…]

Seth Rollins has a bit of a reputation for being an unsafe worker in the minds of some fans (and other wrestlers, too). He’s been the source of more than a few broken noses and other injuries, but it was his match with Sting that really soured a lot of fans[…]

In 2015, Seth’s fiancee leaked photos of both Rollins and his lover on Twitter.

If you want to see fans really get angry, you just have to listen to one wrestler talk about a wrestler who they like better.

Dean Ambrose (now Jon Moxley) left the WWE for the greener pastures of…well, pretty much the rest of the world. He debuted in AEW almost right after his last WWE match and then went on to work a handful of indie dates and even debuted in Japan to become a champion.

What was Rollins’ reaction?[…]