This Week The Modfather is joined by the wheeler dealing London salesman/wrestler ‘Savvy’ Sid Scala. Sid’s been involved in the business since he was 9 years old, that’s right 9 years old! We talk about his humble beginnings in the world of wrestling, why it took him nearly 10 years to have his first official match and the origin behind the name and character. Not to mention we talk in depth about the build up and his match with WWE Legend Vader. Trust me that last part you won’t want to miss. CRAZY STORY! 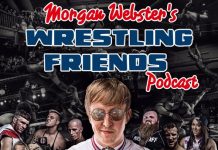